Blue Moon is the new Jack Reacher thriller from Lee Child. I was excited when my friend Simone who blogs over at An Ordinary Gal also received this book this month, we decided to buddy review it so make sure you also check out what she thought of her first Jack Reacher book! 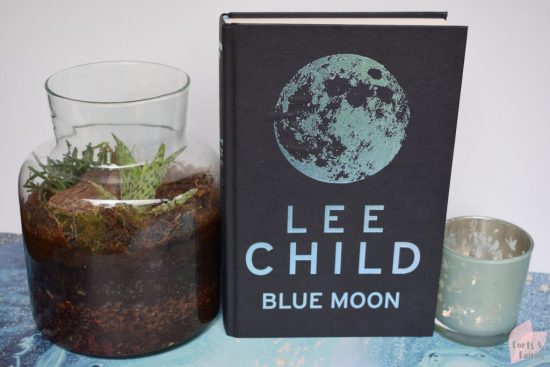 He never goes looking for trouble, but trouble always seems to find him and he’s always more than happy to meet it head-on. When Reacher notices a guy on a bus eyeing out an older gentleman’s wad of cash he follows him to help him during an attempted mugging.  The good deed turns into something much bigger when Reacher realizes that the city is run by two opposing gangs, the Albanians and the Ukrainians, and that the old man is at the mercy of these ruthless money lending people.

As Reacher sets out to right the wrongs and help, things become even more complicated than what he expected. But Reacher has never met a fight he walked away from, and he’s willing to put it all on the line to help. “This is a random universe,” he says. “Once in a blue moon things turn out just right.”

The new Blue Moon is action-packed, with plenty of Reacher’s trademark attention to detail making it a detailed account, but with a touch of humour as he brings in the guidance of other military units. Unfortunately it’s also this technicality that can make certain sections a little dry, and the excessive violence may also put you off. With that being said, however, if you’re a fan of Reacher you will enjoy this book, and if this is your first time meeting him I think you may just be wanting more soon.

Don’t forget to head over to Simone’s blog to read her review too, and let us know if you’ve read a Jack Reacher book before.

Blue Moon is available from book stores and online retailers for a recommended retail price of R350.

Thanks to Penguin Random House for sharing this new Jack Reacher adventure with me.