Giraffes Can’t Dance is one of my all time favourite children’s books. It’s one of those classics that no matter how many times I read it I still find myself smiling at the story, and my children love it too of course! 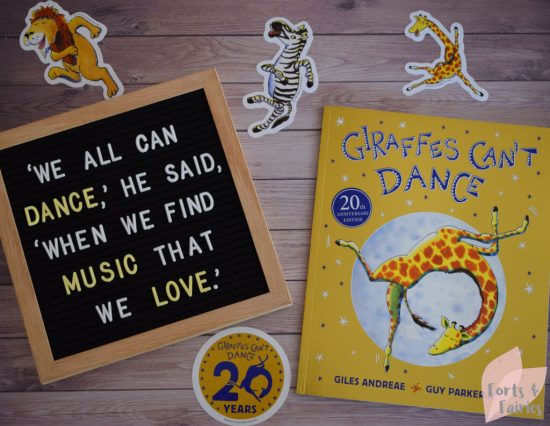 Written by Giles Andreae and illustrated by Guy Parker-Rees, Giraffes Can’t Dance is celebrating it’s 20th anniversary this year. There is a beautiful new 20th Anniversary Edition with a gorgeous gold cover now available, perfect timing to add this wonderful book to your book shelf if you don’t already have it.

Gerald was a tall giraffe

Whose neck was long and slim,

But his knees were awfully bandy

And his legs were rather thin.

There’s a Jungle Dance every year in Africa, and all the animals join in. The warthogs waltz, the lions tango, and the chimps do a cha-cha. But Gerald feels sad because he’s bad at dancing, and despite bravely wanting to try he’s told giraffes can’t dance and walks home alone.

He happens to meet a cricket, who wisely advises him “sometimes when you’re different you just need a different song.” Feeling inspired Gerald starts dancing, soon the other animals arrive and are amazed at his moves. Asking how it is that he, a giraffe, can dance like that, Gerald says “We all can dance, when we find music that we love.”

The book features beautiful, brightly coloured illustrations, a wonderful rhyming story and fantastic lessons about being yourself and finding your own tune. Giraffes Can’t Dance has it all, and that’s why it’s been delighting children for 20 years now and why I know Gerald will delight your own children too. 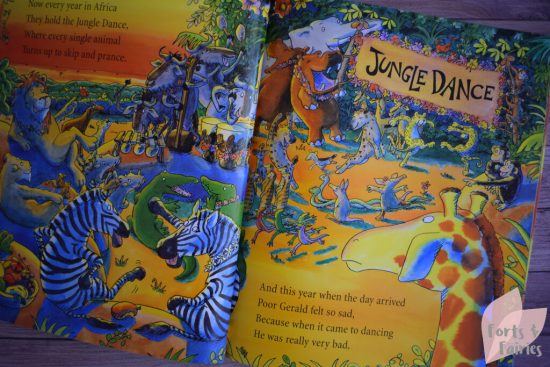 Thanks to Pan Macmillan for sharing this beautiful 20th Anniversary Edition with us.