The animals are stranded in the Pride Lands and it’s to you to rescue them! Join Kion, Beshte, Bunga and Fuli as you race across the board to rescue your animal friends and win the game.

Surprise Slides: Roaring Rescue is a fun boardgame that your children will enjoy, we have enjoyed a few rounds already now and it didn’t take long for my four year old daughter to understand the rules although I do have to help my two year old son navigate his way around the board. It’s easy to set up, simply unfold the board, pop the path tiles into the holes in the board, and slot the eight stranded animal tokens into the rescue areas on the board. You’ll also need to insert the characters into the little mover bases and place them on the start space. 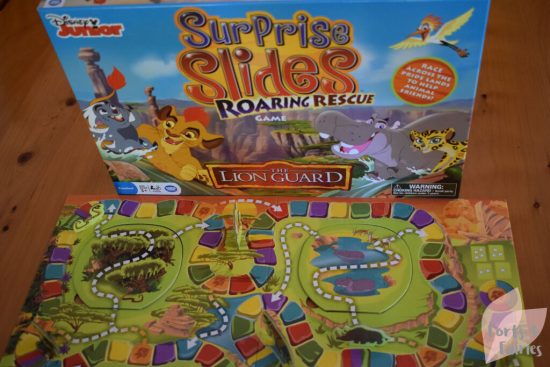 The brightly coloured board has a main path that the characters will follow, but there are also four big path tiles that can be moved and flipped during the game which will change the paths. Choose your character (this can be quite contentious, but I find that letting the kids swop characters after each round does the trick to keep the peace!), spin the spinner and you’re off on your roaring rescue! 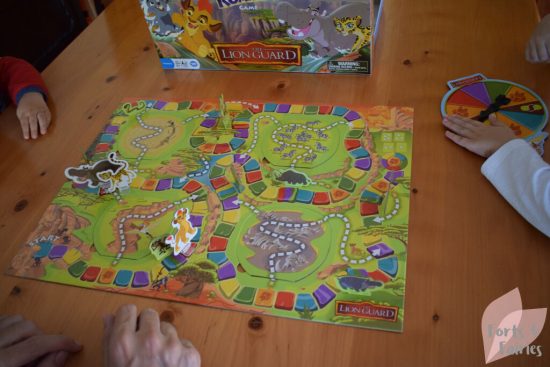 Moving and flipping the path tiles keeps changing the paths you can follow for the Lion Guard symbols, so keep your wits about you. This brings variety to the game, makes the little ones keep a close eye on the proceedings, and also leads to loud squealing when the path tiles change to different animals…“whose bones are those?” “Zebra!” are two examples of such squeals.

Your spin can also lead you to land on the rescue space (any space with three colours), and then (and this is the super exciting part for the kiddies, trust me!) you’ll be able to rescue that stranded animal. I found Amy selecting paths that would allow her to not proceed more swiftly to the finish, but that would allow her another chance to try and rescue the animals. Every game you can change where the rescue animals are on the board too, which is another exciting part of the game for the children. 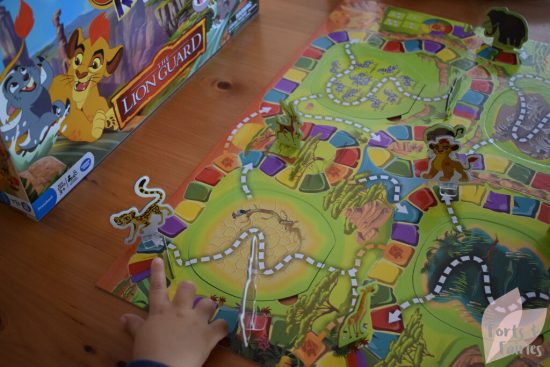 Once all the players have reached the finish space, you add up your points from each rescue animal (one point per rescue) and the number of stars based on your finishing position. Even though there is a winner in the game, I found that my kiddies enjoyed playing the game more so than worrying whether they won. I also found that they would count their success based on animal rescues, and even if they didn’t win they would happily jump into another round with no hard feelings. The rounds are quite quick so we have often played two games in a row.

The boardgame itself is bright and if your children do enjoy watching The Lion Guard on TV then they will definitely enjoy selecting this game from your shelf. The board is sturdy, as are the path tiles, character movers and stranded animal tokens, which are all made from a thick board. The spinner is also made from thick board and has two handy areas for being held easily, one at the bottom where the logo is and one above where Ono is.  This means your little one can hold it and spin themselves, or you can hold it for them while they spin. The rules are concise and clear, and the game can be played with between two to four players. 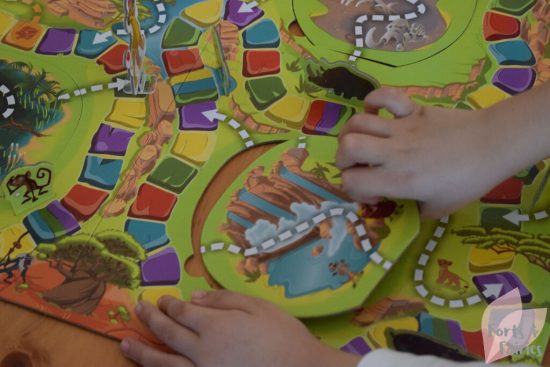 I have really enjoyed our time spent playing Surprise Slides: Roaring Rescue, it’s been a fun way to spend the afternoon together and I can see us playing many rounds during the upcoming school holidays. It’s also been a great way to practise the different animals, colours, counting and turntaking while playing the game, mom multitasking at it’s best! 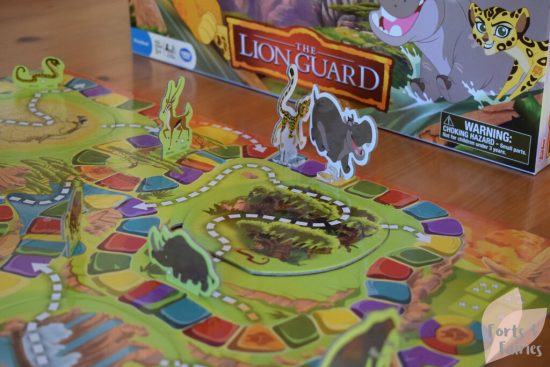 Thanks to Prima Toys for letting us have a fun roaring rescue time!