During the first few months of being pregnant I was ravenously hungry a lot of the time. To my mind this made little sense since obviously the baby was not requiring much in the form of nutrition from me yet, and I was also suffering from bad morning sickness. But be that as it may I would often find myself waking at night and needing to visit the fridge to grab a snack.

These hunger pangs waned during the second trimester but hit again with a vengeance when I entered the final phase of being pregnant. By this stage the baby was obviously growing at a rapid pace, and he was demanding womb service at all different times, both day and night, but mostly during the early hours of the morning.

My husband would often joke that he would wake in the morning and be interested to see what I had snacked on in the night. There was almost always an assortment of goodies next to my bed: an empty yoghurt container, a banana skin, juicebox with straw dangling out. My reply to him? Why don’t you tack up a small rubbish bag next to my bedside table like hospitals do so that there isn’t so much litter next to my bed at night. It’s a good idea, right? Perhaps it started in the maternity ward with hungry mothers. 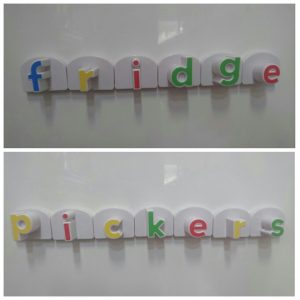 I’m grateful that there’s a light in the fridge so I can pop there in the darkness and choose what will be next on my midnight snack hit-list. But almost every time that light blinks on I can’t help but to remember a magnet I saw on a friend’s fridge one day: “Fridge pickers wear big knickers.”

Given the fact I had to actually already buy bigger underwear to accommodate my growing belly this phrase has an ominous ring to it for me. I’m just hoping that once baby has finished using my body as an incubator my fridge raiding days will be a thing of the past. Although in the back of my mind I also remember how hungry breastfeeding made me…perhaps this fridge picker will continue her ways a while longer then, let’s just hope the big(er) knickers part doesn’t come to pass.

(I wrote this in April when I was eight months pregnant, little did I know that little Ethan would enter the world just ten days later. And yes, I did remember correctly, breastfeeding does make me super hungry)