Never Saw Me Coming is an intriguing new psychological thriller from Vera Kurian. The story is original, giving readers what feels like a real glimpse into the mind of a psychopath. 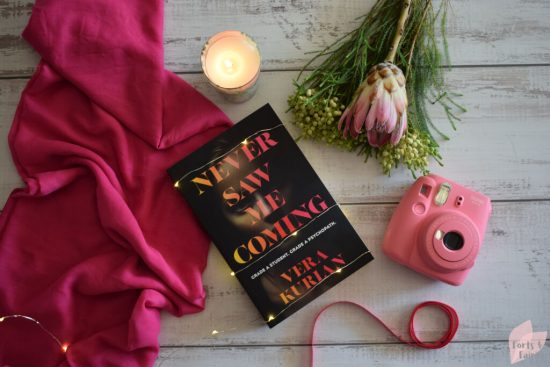 The book centers on a group of psychopaths who are part of a secret clinical study being run by a university’s psychology department. Chloe is a first-year student with a high IQ, she also just so happens to be a diagnosed psychopath. She’s only taking part in the study to be closer to one student, a person against whom she has a personal vendetta. But when one of the participating students is murdered, she’s forced to focus on something in addition to her plan to kill Will Bachman.

The participants are not supposed to know each other’s identities, but Chloe must now work to uncover who the other psychopaths are and consider who she can trust among them. The mistrust between them builds as they identify one another, and it won’t be long before you’re wondering who the real threat among this group is.

Never Saw Me Coming is like nothing I’ve ever read before. It was disturbing to realise how psychopaths can blend in, to see that they can be so cold and calculating to get what they want, and how their lying can go undetected. I was surprised that I could find an antiheroine like Chloe, a person who I would describe as cunning, deceptive, conniving and manipulative, to be so fascinating.

Never Saw Me Coming is available for R290.