As a thriller enthusiast I can say that C.J. Tudor’s latest book The Burning Girls is a well-crafted story filled with twists and turns that you will not see coming. She is a master of her craft and even though I was left feeling somewhat hoodwinked that I had not seen how much of the plot would unfold, I was also slightly breathless that she had managed to keep me in the dark for the hours that I spent with her characters in Chapel Craft. My thriller fix was met, and then some in this book. 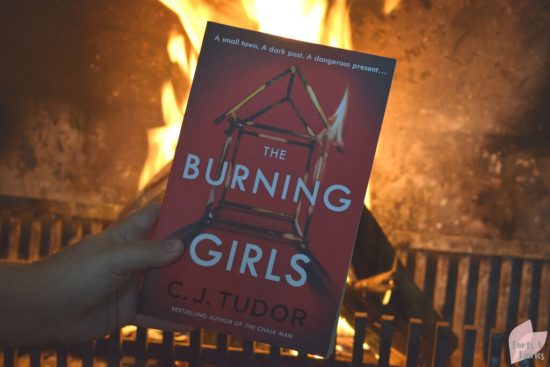 Reverend Jack Brooks is transferred to a small town, happy to be moving away with her daughter Flo after an unfortunate incident made their lives difficult. Relocating to start a new job at a small church may have seemed like the perfect way to escape from the public eye, but she gets more than she bargained for with rumours of a haunting by the martyrs who were burned to death in the town centuries ago, twig dolls made to commemorate the martyrs and ward off their spirits, and even the uncertain spotting of ghosts. There’s also the fate of the previous vicar to consider, along with the disappearance of two girls thirty years ago.

Determined to uncover the truth Jack sets out to dig into the history of the two missing girls. But as she gets closer to finding out what happened all those years ago it seems that someone is willing to do whatever it takes to keep the truth buried. The people within the small town are on edge with having an outsider asking questions, but how far are they prepared to go to keep their secrets…someone has  murdered once before after all.

The story is intricately woven and will have you questioning whether you ever in fact knew what was going on. This will apply even until the last chapters of the book. It’s not often that a thriller can do that, and C.J. Tudor deserves all the praise for achieving this and more. If you like your thrillers dark and twisty then you are going to love The Burning Girls. My only regret is that I can’t read it again without knowing the truth, but with that being said I think I will enjoy reading it again knowing the truth!

I would assign a trigger warning to this book for parental abuse and neglect, religion and bullying.

The Burning Girls is available for a recommended retail price of R320.