The President’s Daughter is the gripping new thriller from the collaboration between James Patterson and Bill Clinton. 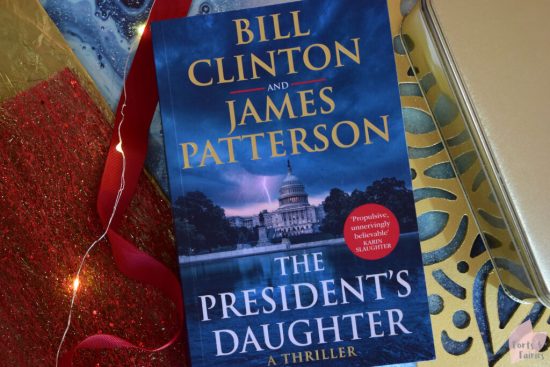 Matthew Keating is the former President of the United States. He’s traded the responsibilities of running a country for a quieter life in a rural area post-presidency. His daughter Mel wants to return to a normal life again and she’s happy to be free of her protection detail. Truth be told, because she’s older than sixteen she was no longer eligible for Secret Service protection once her dad left the president’s office.

So when an enemy of Keating comes after her, Mel is on her own and she’s kidnapped. Luckily for her she’s been taught how to deal with a potential kidnapping situation by David Stahl, the special agent in charge of Keating’s Secret Service detail. Mel is also not just the daughter of the former President, she’s the daughter of a one-time Navy SEAL who has raised her to be street smart and savvy.

This book was a gritty look at the criminal underworld and how challenging it would be to face this dilemma. As the story unfolded I found it to be a raw and honest account of how this father would be willing to go to any lengths to find his daughter who had been kidnapped by an enemy with a point to prove.

The details of the Secret Service protection, how the FBI handled matters and just every aspect of how the operation was rolled out felt very real – this was no doubt thanks to the authenticity that Clinton brought to this account, which struck the balance well with delivering just enough details to make it feel accurate but not too many that it felt overly technical. I loved The President is Missing and I had been looking forward to diving into this book too, it didn’t disappoint and I would recommend it if you, like me, enjoy reading or watching books and series that involve the FBI or Navy SEALs.

The President’s Daughter is available for a recommended retail price of R320.