It’s hard to believe that Frozen was released in 2013, that even though it’s been six years since the film first took the world by storm girls still have Frozen themed parties, dress up as Elsa and Anna, and continue to belt out Let it Go. Such is the impression that Frozen left on us. 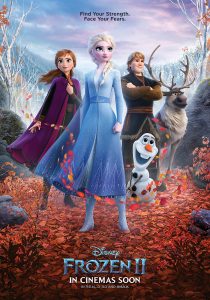 Because of the success of the award-winning original film I did wonder if it was possible for Frozen 2 to be a worthy successor. Disney has achieved the impossible, they have created a sequel that not only lives up to the reputation set by the first film but in many ways even surpasses it.

Elsa hears the call of a mysterious voice, and when she sets out to answer it she discovers her kingdom is in peril. She embarks on a dangerous journey together with Anna, Kristoff, Olaf and Sven to uncover the truth about the past, but she gets much more than she bargained for as the origins of her magical powers are finally uncovered.

It’s like meeting up with old friends as we see the gang again – Olaf will still make you laugh out loud, Kristoff and Sven will still sing “duets” while Anna is still prepared to follow Elsa into fire to keep her sister safe. The ballads are as powerful, there is an element of haunting beauty, aching loss but also of determination and bravery in the new soundtrack. Mixed with a fair dash of humour of course, what would Frozen 2 be without fun new songs from Olaf and the Kristoff/Sven duo.

Despite this there are scenes that may be frightening for little ones, with the elements of fire, earth, water and wind up to mischief, gigantic earth giants to contend with and Elsa’s fight with the water spirit to cross the sea being particularly dark. There is also a bit of sadness as the family’s history is explored and the secrets of the past come to light. This is lifted by lighthearted moments too, such as the game of charades, the skit by Olaf who gives us a hilarious refresher of what happened in the first film, and the adorably cute salamander.

Frozen 2 is a visually stunning film that promises to captivate both young and old. Get ready to head off on an adventure into the enchanted forests and dark seas beyond Arendelle, and to have the new songs on repeat in your house very soon.

Frozen 2 will be in cinemas across South Africa on 6 December. Be prepared to head into the unknown!

Thanks to Disney for hosting me for the press preview.