From the moment I held Nintendo’s new golden Game & Watch in my hands I could not stop smiling. There’s something just so special about holding this retro console and playing the original Super Mario Bros. on it. And if you weren’t already smiling, you will be once the iconic Super Mario Bros. music starts playing! The console itself is very light, so it’s easy to hold, with the buttons being positioned perfectly for great gameplay. Can we just take a moment to talk about the music? It is just so classic Mario that I can’t help but to fall in love with Mario all over again.

Did you know that the original Game & Watch system was released in Japan in 1980? It has the honour of being the first handheld gaming console created by Nintendo! If you’re an old school gamer you will love this trip down memory lane, and if you, like me, are raising the new generation of gamers you will love to share this new Game & Watch with your own children. My children’s eyes lit up when they saw the console and they could not wait to have a go. I couldn’t help but wonder if they would one day be playing a retro console of this retro console! 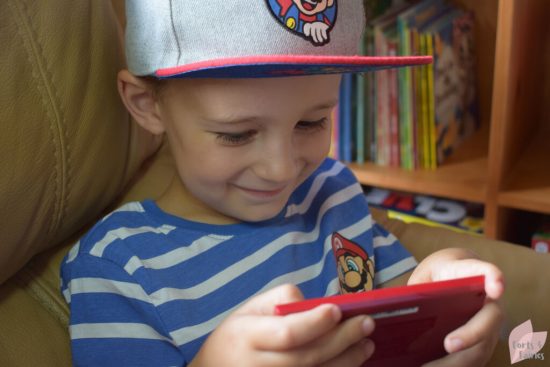 The Game & Watch: Super Mario Bros. system has been released to celebrate the 35th anniversary of Super Mario Bros. This special system includes Super Mario Bros., Super Mario Bros.: The Lost Levels, and the Mario version of Ball. If you’d like to you can play as Luigi in Ball too, simply hold the A button on the title screen of Ball for five seconds and you’ll be able to step into Luigi’s shoes! The system’s +Control Pad gives you tighter controls when playing the games. There is also a digital clock which may play 35 different animations, you’ll even be able to spot a few familiar faces, some friends and foes of Mario. It comes packaged with a USB charger for charging the Game & Watch. It takes about three hours to charge the system and it will give you about eight hours of play time.

One of the new features is an Infinite Mario mode on both Super Mario Bros. and Super Mario Bros: The Lost Levels. Having endless lives means you can tackle the tougher stages more easily – hold the A button when you start to activate this mode and switch back to the game’s normal setting by pressing the pause/set button and then select reset game.  You can skip to your favourite world now, press the B button on the title screen of Super Mario Bros. or Super Mario Bros.: The Lost Levels and you will be able to select a world you’ve reached before and start from course 1. For those who enjoy a challenge you’ll be happy to know you can unlock a harder difficulty mode by completing Super Mario Bros. in its entirety. Although this was present in the original game once you turned the game off it used to no longer be accessible. You can even enjoy some two-player competition by passing it to a friend! If you complete Super Mario Bros.: The Lost Levels you’ll notice a star is added to its title screen. Complete the game eight times and you’ll get eight stars, giving you access to the secret World A with four stages (press the B button on the title screen).

So if you have someone in your life who would love to relive the classic system that changed gaming history then make sure you check out the Game & Watch. It may even just be the perfect present for Valentine’s Day! This system will only be available for purchase while supplies last and will only be shipped to retailers until 31 March so make sure you act quickly if you want to get your hands on this little piece of history. The Game & Watch: Super Mario Bros. system is available from online retailers for a recommended retail price of R1299.

Thanks to Nintendo for letting us experience this awesome new (old) system!