There once was a time when the land was filled with magic, but over time as technology made things easier the magic was forgotten and the fantasy became more suburban. Until one day a wizard’s staff is finally handed over to two teenage elf brothers, setting into motion a change of events that neither of them could have dreamed of. 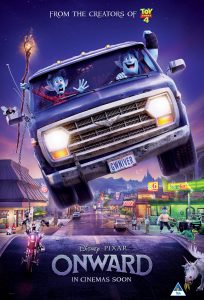 Onward is the heartwarming tale of these two brothers. Barley born knowing his dad for a short time, and Ian born after his dad had already passed away. The older brother is brave while the younger is more reserved. When the staff, a gift from their dad, is revealed along with a magical spell to bring back their dad for one day, their lives seem destined to change forever.

The spell isn’t completed, however, and only the bottom half of their dad is brought back. They then set out on a quest to complete the spell and spend whatever time they have left in the 24 hours with their dad.  One desperate to finally meet his dad and find his courage, while the other wants to make amends for mistakes made in the past.

You’ll journey to the manticore’s inn and meet a few interesting characters along the way to find Raven’s Point. Ian (voiced by Tom Holland) will discover how to use the magical staff and follows the lead of his brother Barley (voiced by Chris Pratt) who believes he is wise to magic folklore from his knowledge of boardgames.

Onward will make you laugh, but be prepared to cry too as the adventure will lead you to discover that sometimes what we’re searching for has been right in front of us the whole time. It’s a poignant tale of love and loss, and don’t be surprised if you leave the cinema with the motivation to go give your family members a big hug.

Disney and Pixar’s Onward releases in cinemas on 6 March. You can watch a trailer for the film below:

Will You Be My Friend? (Book Review)