It’s no secret that I’m a Star Wars fan, you may recall that husband and I had one of our few date nights to watch it on the big screen. It was awesome then, and it’s awesome now. Not quite as awesome as Amy asking us if she can watch it when she’s a bit older because she wants to see the Stormtroopers (parenting high-five!). But pretty darn awesome.

Rogue One: A Star Wars Story is the first stand-alone film from Lucasfilm, it features all new characters and tells us the story of how the Rebel Alliance came to know about the flaw in the Death Star’s design. You will know, of course, that this knowledge was later used by the Alliance and ultimately resulted in Luke Skywalker destroying the Empire’s weapon. That action took place in Star Wars Episode IV: A New Hope, but don’t expect any less action in Rogue One, or any less humour either. 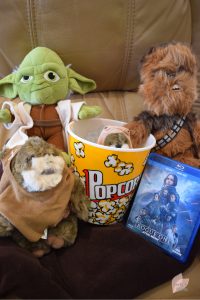 As is customary in Star Wars movies, there is a droid who brings a dash of humour to the tale. K-2SO joins the band of unlikely heroes who set out on a dangerous mission to steal the plans to the Death Star.  You’ll meet Jyn Erso and Cassian Andor, who each have different reasons for joining this team, along with Baze and Chirrut, who also bring their own wit and charm, and finally Bodhi Rook, an Imperial pilot who defects with key information for the Alliance.

It didn’t take me long to grow fond of the members of this new team, and I enjoyed watching the story arc unfold in a number of action-packed sequences. Rogue One: A Star Wars Story is now available on Blu-ray and DVD, and with all of the bonus features packed onto the release it’s definitely one to add to your movie collection. Some of the extras included are a deeper look at the main characters from the actors’ perspectives, as well as a look at how the movie’s concept was born, and how the movie was made to fit within the world of the original trilogy.

If you’re a fan of the Star Wars universe you should check Rogue One out. It should have been a day one purchase in fact! If you don’t know where Dagobah is, or you wouldn’t know what to order at the Cantina, if you’ve never imitated a Wookiee’s call, or if you don’t know which is the fastest ship in the galaxy, then watch Rogue One. You won’t be disappointed, and then you can go and enjoy all of the other Star Wars movies too, and come back with the answers to my questions.

It’s addictive though. A long, time ago, in a galaxy far, far away remember that I did warn you!

Check out some screenshots and a trailer for Rogue One below: