The Rhino is one of Africa’s most iconic and endangered wild creatures. Tomorrow is World Rhino Day, a day for us to remember the war that is being fought daily against poaching, and a day for us to stand together and to help make sure the rhinos are still here for our children to see in the future.

Prima Toys and Wildlife ACT have joined forces again to help raise funds and support the care of orphaned baby rhinos. Prima Toys and Pick ‘n Pay have raised over R500 000 for Wildlife ACT in the past through the sales of their Baby Rhino and Wild Pals soft toy promotions.

This year Prima Toys will launch 20 000 Rhino Coin Banks into South African toy retailers and supermarkets in support of World Rhino Day. The soft toy rhino ‘piggy banks’ will feature a plastic interior and removable stopper to hold coins and cash inside the rhino’s belly.  For every Rhino Coin Bank purchased Prima Toys will donate R10 to Wildlife ACT.

“Prima Toys hopes to raise awareness of the plight of rhinos among younger generations, and have guaranteed a contribution of R200 000 to this very worthy cause,” said Chiquita Patrizi, Marketing Executive at Prima Toys. 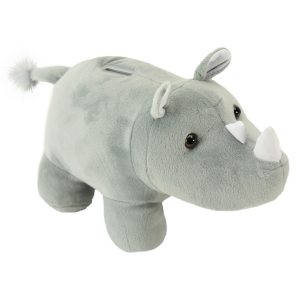 You’ll also be able to donate any money your children save in their Rhino Coin Bank back to the Wildlife ACT here. In addition to teaching your little ones the importance of saving and being a part of this cause, and how they can help, they could win one of ten toy hampers from Prima Toys if they donate through the GivenGain website.

“Despite a small drop in poaching numbers announced by the Department Environmental Affairs recently, our rhinos are still under threat,” said Johan Maree from Wildlife ACT. “Not only do we need to keep up the fight against poaching, we desperately need to ensure that the baby rhinos that are orphaned as a result, are rescued and adequately cared for. Without their mothers, orphaned rhinos would sadly die without our assistance.”

Head over to the Wildlife ACT website to watch a video detailing the amazing work this organisation does, and you can even hear what a baby rhino sounds like!

In the words of the great Nelson Mandela, “It Always Seems Impossible Until It Is Done.” Let’s work together and get it done South Africa!

Artwork is hard work from the heart