The Noise is the new thriller from James Patterson and J.D. Barker. It’s a disturbing story that will have you questioning the ‘what if’ scenario, for it’s the details that will bring this terrifying tale to life.

This book definitely gave me some science-fiction vibes – I’ve watched my fair share of science-fiction movies and played many Resident Evil and other videogames that would fall within the horror genre, and I think if you’re someone who has enjoyed that kind of media then you will appreciate The Noise. 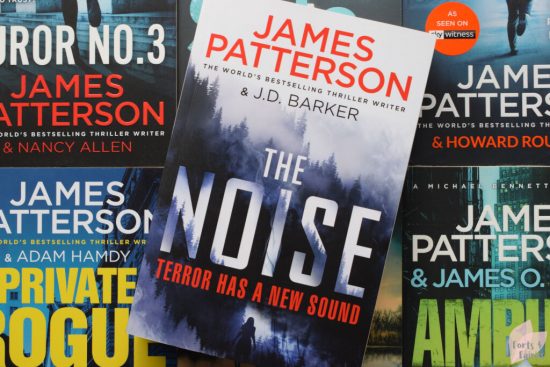 There has been some sort of terrible accident at a rural village. The destruction is catastrophic, there are no signs of wildlife and all the villagers are missing. A group of different experts are flown in to try and assess what has happened and to discover the truth behind whatever this anomaly is.

As it turns out there are two survivors. A young girl named Tennant, who is one of narrators from whom we get a first-hand account of the experience, and her younger sister Sophie. Tennant is trying to save Sophie from the fallout of whatever has happened.

Sophie is the most disturbing character you’ll meet in the story, you’ll find the scenes with her raising the hair on the back of your neck. Sometimes you’ll still see the little girl, begging for help, but more often than not you’ll see the chilling, threatening side of her. It will leave you wondering whether she’s possessed, and if so by what or who.

Battle hardened Lieutenant Colonel Alex Fraser has seen more than his fair share of the atrocities of combat. So you know things are serious when even he is feeling edgy.  Martha is one of the experts, she’s torn between wanting to leave and return to normal life with her two children, but being unable to turn away knowing what’s happened. She brings a slightly softer side to the story, driven to find the truth behind the anomaly but still very reluctant to cross any moral lines.

There are others who are starkly contrasted, not so concerned about any ethical considerations and willing to use any means necessary to uncover the truth and fix the current problem. The question is who will sway the President?

The Noise was a change of pace for me, leaning more towards a horror than a traditional thriller. If you enjoy horror you may well appreciate The Noise. Personally I found myself questioning the plot, especially once I hit the halfway mark of the book, and this resulted in me losing the immersion a bit which diminished my enjoyment of finishing it.

Whoosh! Went the Witch, Room on the Broom Sticker book

When She Was Good (Book Review)