Last week I attended the Durban launch of the new book An Elephant in My Kitchen at Exclusive Books in Gateway. This is the sequel to the popular The Elephant Whisperer by the late Lawrence Anthony, and continues the tale of the now famous herd of elephants at the Thula Thula private game reserve in KwaZulu Natal, South Africa.

The book is written by Françoise Malby-Anthony with Katja Willemson. Françoise was at the launch together with the wonderful team from Thula Thula including four game rangers from the reserve and the manager and chef as well – all of whom are mentioned in the book. Having the whole team together made the evening special, as did the fact that Lawrence’s mom and son as well as Katja’s mother were also in attendance in the audience.

Adventure around every corner

Françoise was in conversation with East Coast Radio presenter Terence Pillay, who made sure the evening was not only interesting and insightful but also full of fun and laughter too. We heard Françoise chat about her first experiences coming from France to South Africa and how she had gone on her first game drive with Lawrence. She shared a memory of her first encounter with wildlife in Africa, how a mouse had dropped onto her stove soon followed by a snake chasing the mouse! She soon learned that living in the wild meant that adventure was around every corner.

As per her own admission Françoise was a city girl and it took her time to adjust to a foreign country and to being in the wild…it was something of a culture shock! The adventure truly began to unfold when the first seven elephants arrived. Now there are 29 elephants, each with a name and each marked on the elephant family tree with their own identity card. The rangers can recognise each elephant from their particular behaviour.

Françoise then delighted us with a few new stories of the latest antics of the elephant herd that were not shared in the book. She had been travelling abroad to launch the book and when she returned Frankie came into her garden, stepping right over the electric wire meant to caution the wildlife not to enter this ‘restricted area.’ The other elephants tried to follow the matriarch but received the shock to say no, then proceeded to show Frankie with their trunks that there was a wire there that may hurt her and to help guide her over it. Françoise said Frankie then used “acrobatic elegance” to climb over the wire out of the garden, and the herd “trumpeted when she did it.” The relationship between Françoise and Frankie has come a long way since their initial dangerous encounter on the quad bike (which you can read more about in the book). 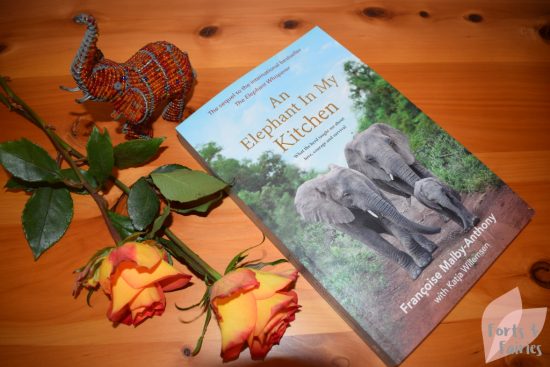 On another occasion the head of security was concerned when three of the security cameras had gone down in a short space of time. He was worried it may be poachers interfering, but upon closer investigation discovered that an elephant trunk featured up close in each last frame before the camera fell. Françoise laughed as she said it was a sort of “Ellie selfie!”

Another recollection of how the reserve had been in the grips of a drought, but then after a few days of beautiful rain the elephants had come to her house to enjoy a mud bath. As she said they could have chosen any mud bath across the entire reserve, but came to celebrate the rain together with her, throwing mud joyfully into the air with their tusks while the baby elephants used their trunks. This is just another example of why you “cannot not fall in love with them” Françoise shared.  The herd has come to her house three years in a row on the same day at the same time on the day that Lawrence passed away, she says that is very real to her and the team. 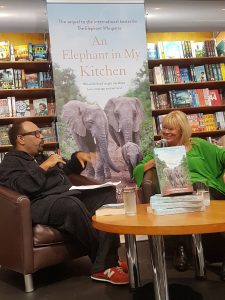 Françoise then chatted about the two orphan rhinos that came to Thula Thula in 2009 from Limpopo, having lost their mothers to poachers. Thabo was 4 months old and Ntombi was 8 months, with both rhinos now being 10 years old. Having both been brought up at the lodge they are used to humans. Even though both are now in the wild in the reserve (together with their protection team) Thabo still loves to be kissed and cuddled, and had on more than one occasion in the past broken a tent and even a verandah in search of affection. Elaine was his carer when he was small, and soon discovered that he was a 170kg blanket stealing baby rhino and that white sheets were not a good idea. You can read more about how Thabo even broke her bed in the book.

Poaching is a very real threat

The discussion turned a little more serious when Françoise spoke about the challenges the team face at Thula Thula. Poaching is a very real threat, and she finds it essential to have a goal and a purpose to keep her focused on what is important – the protection of their wildlife and their people is the priority. Their security is being improved non-stop and that is a never-ending process.

As you can imagine there is never a dull moment in the life of Françoise at Thula Thula, but it’s filled with both “beautiful moments and tragedies.” She touched on the orphanage tragedy that is detailed in the book, and then highlighted the Rescue and Rehabilitation Centre that is a facility to rescue wildlife and has been home to kudu, nyala, genet, meerkat and even a giraffe.

There is no typical day at Thula Thula, but the team is tired of poaching which necessitates 24 monitoring with cameras and security guards, all of which comes at an insane cost. This was met with a thunderous round of applause. Françoise and her team believe that education is key to conservation. For this reason the Thula Thula Volunteers Academy was established, to educate, inspire and to let people understand the efforts being made to protect our wildlife. There are eight people at a time, seven paying volunteers and one from the local community who attends for free. The rangers also go to schools in the local communities to teach about the dangers and consequences of poaching. 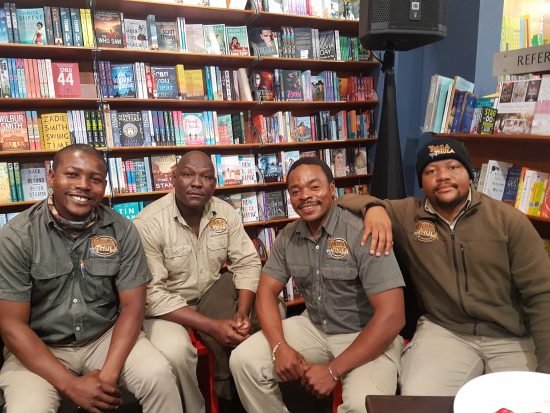 Françoise pointed to the youth in the audience and reminded us that in 20 years time there won’t be any wildlife for our children to enjoy if this poaching continues. This is sadly not only rhinos, but vultures, hippos, lion and elephant too. The reserve is currently also fighting a court case to prevent coal mining in the area, another front but the same fight – to protect our wildlife. Françoise believes children are the future and they are who we need to fight this battle for.

Last words from Françoise as to why you should read An Elephant in My Kitchen, “if you love adventure, if you love Africa, if you love animals, then you will enjoy this book.” The book took a year and a half to write, she would send recordings to Katja who also visited Thula Thula, spent time there and interviewed the team and helped to organise it into chapters. The main reason for writing the book was to answer everyone’s questions about what is happening at the reserve. She would get asked “How’s Nana?”, “What’s up with Thula Thula?” She also believes it’s a story worth telling, and after reading the book I couldn’t agree more!

In response to Terence asking her if she still felt like a foreigner in our country, Françoise replied “Of course not, I’m an African!” She then joked “I’m almost losing my accent,” which caused a few laughs as her French accent is still strong as are her mannerisms. For example, when she shared the story of how she first met Lawrence in London, she was asked to share a cab with him given the adverse weather conditions. She saw him, and promptly said “Non.” Or the numerous times she said “En Voila” when chatting about her memories at Thula Thula. You’ll have to read more about this first encounter in the book too! 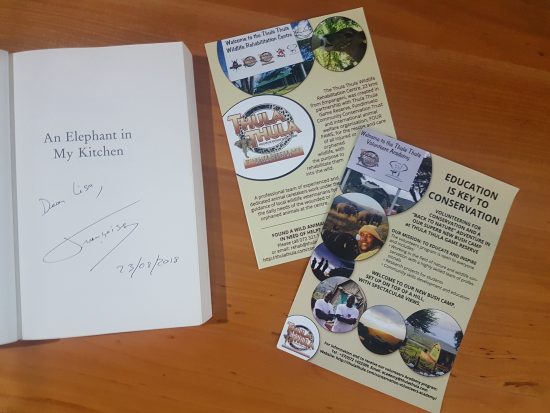 Thanks to Pan Macmillan, Exclusive Books and Terence Pillay for making the book launch a great success, and most importantly thanks to Françoise and the Thula Thula team for making it a special evening. If you haven’t yet read An Elephant in My Kitchen make sure you check out my review to hear more about what you can expect from this wonderful new book.

What’s hot with Disney this Christmas!