My two children adore Mary Poppins, we have the soundtrack to the original movie on CD and can often be found twirling around our lounge singing ‘Let’s Go Fly A Kite.’ I guess I’m old school that way. Naturally I was excited then to hear about the upcoming sequel to this classic movie, and I couldn’t wait to see Mary Poppins Returns.

As expected the movie really is magical, it’s wonderful to introduce a new generation to the wonder of Mary Poppins, to remind us how great musicals really are, and to teach us valuable lessons about family and friendship along the way too. 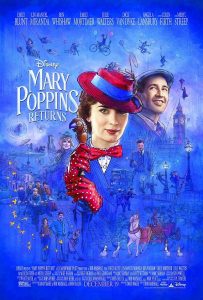 While PL Travers’ 1934 children’s book Mary Poppins first introduced us to the nanny, this new musical sequel with all new original songs is based on the Mary Poppins stories in the author’s other books. Mary Poppins Returns takes place 24 years after the first film, and finds the Banks family still living at 17 Cherry Tree Lane.

Mary Poppins Returns sees the famous nanny returning to help with the Banks children once again. She had looked after Michael and Jane when they were younger, and now returns to assist the next generation of the Banks family who are floundering after Michael’s wife passes away and leaves him to juggle being a single parent to three children and the financial strains of living in London during the 1930’s Depression.

And so begin a number of unique and fantastical adventures for the Banks children with Mary Poppins and her street lamplighter friend Jack.  For as we all know Mary Poppins is no ordinary nanny, she has magical skills that help to bring the sparkle back into the children’s eyes and laughter back into the house.

Emily Blunt shines as Mary Poppins, while Ben Whishaw as Michael, Emily Mortimer as Jane and Lin-Manuel Miranda as Jack are all excellent too. Colin Firth, Julie Walters and Meryl Streep also join this stellar cast, while Dick Van Dyke who starred in the original 1964 musical steals the show with an incredible dance routine. Angela Lansbury, who like Van Dyke is also in her 90’s, appears in the movie too, and is captivating with her song that serves as a reminder to just how great the original stars of Hollywood were and still are.

Mary Poppins Returns releases across South African cinemas on 28 December. It’s a fantastic holiday musical to share with the whole family, you can watch the trailer for the new film below.

Under the Whispering Door (Book Review)