Not a Happy Family (Book Review)

Not a Happy Family is a new thriller from Shari Lapena, a slow-burn read that will have you engrossed with its clever plot. 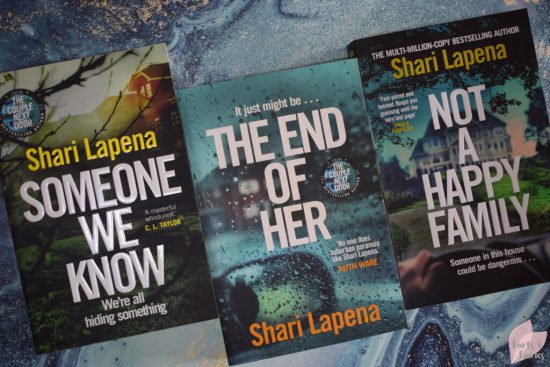 Appearances can be deceiving, and as many of us will know not everyone’s family is as happy as they seem. Fred and Sheila Merton have worked hard to build a very successful business and they enjoy the finer things in life while living in a beautiful house in an upmarket neighbourhood. Despite being given everything they could have wished for, their children bear the emotional scars of a mother who was always distant and a father who constantly belittled them.

The three children, now adults, return to the family home for Easter lunch. The eldest daughter Catherine is a doctor who is doing well and clearly the parent’s favourite. The middle son Dan is financially struggling after being cut off quite suddenly from the family business and often bears the brunt of the father’s derision. The youngest daughter Jenna is an artist who enjoys embracing their disappointment in her life choices and finding new ways to shock them.

The one thing the children are holding on for is what they hope will be a hefty inheritance. But they don’t expect that to happen for a number of years still, so they are shocked when the Mertons are found murdered after the family dinner. It doesn’t take long for the police to start checking into each of the children’s alibis, they each stand to inherit millions after all.

Now being investigated and facing being cut out of the inheritance, the children slowly start to turn on each other. As the beneficiaries of Fred’s will are finally revealed even more suspects are identified and you’re kept guessing right up until the end as to who the murderer actually is.

Not a Happy Family is everything you want from a thriller, a plot filled with many twists and deadly secrets which are slowly revealed so that nothing is given away until the very end.

Not a Happy Family is available for a recommended retail price of R265.