The Surgeon is the first in the Rizzoli & Isles medical crime thriller series by Tess Gerritsen, a book first published back in 2001 but fortunately sent to me to read ahead of the release of the new book in this series Listen to Me. 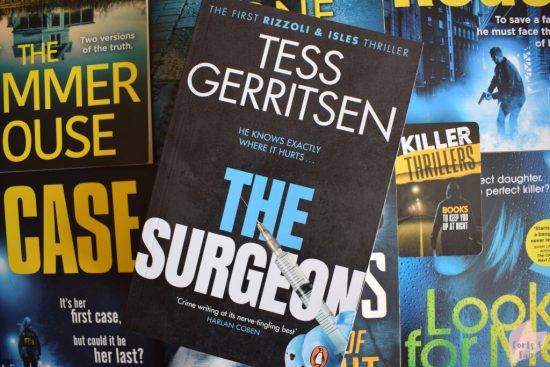 The story centres around a killer who targets lone women, breaking into their apartments to torture and murder them. You’ll meet homicide detective Thomas Moore and his partner Jane Rizzoli, part of the team tasked with identifying and catching the killer. The pair soon believe that the surgical skills used may hint at him being a physician.

Catherine Cordell was once brutally attacked too, however, she managed to kill her attacker. Or so she thought, because now two years later the same patterns in a series of murders are resurfacing and it soon becomes clear that she is not only the focus of the killer’s attention but still very much in his cross hairs. Will the team be able to work hard enough and fast enough to catch him before he strikes again?

The Surgeon is unsettling but as uneasy as it makes you feel, not knowing who the killer is and when he will strike next, it also sends a thrill through you to continue and find out what comes next. It’s a gritty, no-holds barred telling of the brutality of rape and murder, with intense details of the crime scenes, victims, and investigation.  It will almost leave you breathless at the reality but at the same time hooked to dig deeper alongside the detectives and discover more about the killer who becomes known as the Surgeon.

Tess Gerritsen is a physician herself, and the detailed and very real accounts that draw you into this story will make you not want to put this medical crime thriller down. I can’t wait to dig into Listen to Me, even though I may very well be sleeping with the lights on tonight.

Thanks to Penguin Random House for sending me this ARC in exchange for an honest review.