The Yellow Bird Sings is the heartbreaking but inspirational story of a mother and daughter forced into hiding because they are Jews. It’s 1941 in Poland and Róza’s husband has disappeared, her parents taken by German soldiers. She is fortunate in that a family take pity on her and allow her to hide in their barn, but their time spent in hiding is anything but easy. 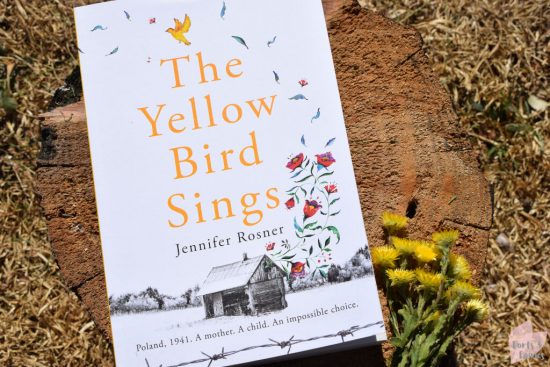 There is always the fear of being discovered by the soldiers and the desperation of having to rely on others to protect your secret hiding place, bring you food and even clear out your waste. The days are very long, and it’s difficult for Róza to keep her five year old daughter Shira silent. Shira is very musically talented, and she tries to stifle her desire to compose by creating an imaginary yellow bird to sing her melodies.

Róza is a mother in an impossible situation, and she’s forced to make an impossible choice. She decides to send her daughter away so she may have a better chance to survive. As the threat of being discovered becomes too much Róza is also forced to flee. She faces many hardships on her new journey – hunger, cold and always the danger of being discovered – but she’s determined to survive for her child’s sake.

Shira meanwhile has challenges of her own to face, hidden at an orphanage she is forced to disguise her Jewish heritage and she lives in terror as she is often forced to hide when soldiers perform checks. Separated from her mother and not knowing what happened to her grandparents, she is lonely and misses her family even as she’s moved from place to place in an attempt to keep her safe.

The story is told from both the viewpoints of Róza and Shari, alternating as the pair are now on two different paths. It’s a tragic tale, offering us a glimpse into the hardships faced by Jewish people during this time, but it’s also a testament to the strength of the human spirit and a story of hope. As author Jennifer Rosner says: “The Yellow Bird Sings is a story about longing: the longing of a child and her mother to be connected, to be heard, to find their way home.”

The Yellow Bird Sings is available from bookstores and online retailers.

Thanks to Pan Macmillan for sharing this inspirational story with me.