Toy Story 4 opens in cinemas across South Africa today, giving our children the chance to experience the magic of Toy Story at the movies and giving us all the opportunity to fall in love with the amazing Toy Story characters all over again.

The original Toy Story was released in 1995, who can believe it’s been over 20 years since we first met Sheriff Woody and Buzz Lightyear? As a parent I know that there will be many different characters that my children will meet during their childhood, but I couldn’t help but hope that mine would love Woody and Buzz as much as I do.  As it turns out they do, no surprise really given the Toy Story gang is awesome! 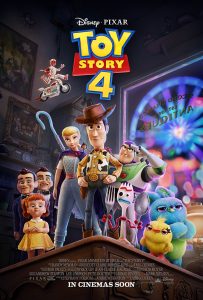 Toy Story 4 sees Woody, Buzz and their pals being given by Andy to a new child. Woody’s main goal is to always put his kid first and keep her happy, so he sets out to keep Bonnie’s new creation Forky safe. Forky, however, has other plans, and Woody has quite the challenge to convince him that he is a toy. This leads them on a new adventure, as Woody reunites with Bo Peep and makes new friends, but also faces the challenge of setting out on a rescue mission to save Forky from an antique shop.

Toy Story 4 is like returning to an old friend. You may not have seen each other or spoken in a while, but when you do it’s as if you picked up right where you left off.  It’s both funny and heartwarming, a story about friendship and putting others before yourself. You will love meeting up with the gang again (including Mr and Mrs Potato Head, Rex, Jessie and Slinky Dog) and seeing what our friends have been up to, but you will also enjoy meeting new friends (Forky, Duke Caboom, Ducky and Bunny)  too.

Toy Story 4 is a fantastic film to enjoy together as a family with your children this holiday. The characters, although created over 20 years ago, still remain some of my favourites and it’s so special to be able to introduce my children to them and see them fall in love with them now too. With Tom Hanks voicing Woody and Tim Allen as Buzz, Toy Story was always destined for great things. Now Tony Hale and Keanu Reeves bring even more talent to the incredible voice cast, making Toy Story 4 a film not to be missed!

Thanks to Disney for the opportunity to attend the preview of the film.