Jumanji: Welcome to the Jungle

Jumanji is a classic, and a film that has now been brought to another generation of moviegoers with a new adventure in Jumanji: Welcome to the Jungle. But instead of being a boardgame like in the 1995 film, Jumanji is now a videogame!

Four high school students discover an old videogame console and are drawn into a real life videogame in a jungle setting. They unwittingly have become whatever avatars they chose to be in the game, and must now team up and embrace their avatar’s strengths and weaknesses if they are to survive.

The cast includes Dwayne Johnson as archaeologist Dr Smolder Bravestone, Kevin Hart as zoologist and weapons specialist Moose Finbar, Jack Black as cartographer and cryptographer Professor Shelly Oberon and Karen Gillan as commando Ruby Roundhouse. The avatars they must now play in the game are very different to their real-life personas, often leading to surprising and funny outcomes. Also featured are Nick Jonas as the mysterious pilot Alex and Bobby Cannavale as the antagonist John Hardin. 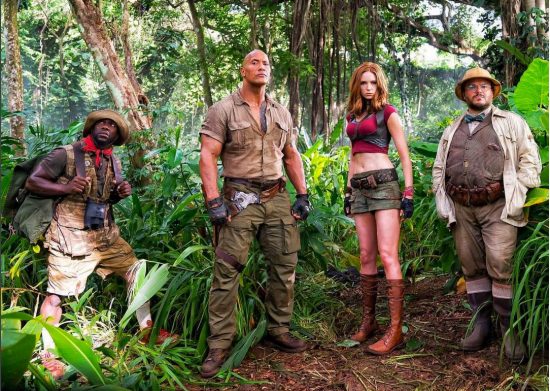 In real life Spencer (who becomes Bravestone) loves videogames, a hobby that will now come in handy as he helps to explain the nuances of gaming to the rest of the team. Being a gamer myself I really enjoyed seeing them discover the NPCs (non-playable characters), that they have health bars and can respawn, and that the challenges become more difficult as they move through the levels in the game.

Spencer isn’t used to being a strong hero type of guy (with smouldering as a strength), and this introduces more hilarious results when football star Anthony is at odds with being the shorter and less dominant Finbar in the game.

Add to this that popular socialite Bethany is now Professor Oberon, a man, and meek Martha is now the highly skilled fighter Gillan and you’ll understand just what a recipe for a fun adventure that Jumanji: Welcome to the Jungle is. They will need to change the way they think about themselves in order to beat the game and return to the real world.

Jumanji: Welcome to the Jungle has action, adventure and a whole lot of humour that promises to entertain you when this film arrives in South African cinemas on the 29th of December. If you’re a gamer I hope you enjoy it as much as I did!