21st Birthday is the latest book in the Women’s Murder Club thriller series by James Patterson. It was an engaging story, one that had me questioning whether they were chasing the right suspect right until the end. Unfortunately, I felt the ending left me hanging because I still had unanswered questions.

This was my first Women’s Murder Club book, and I loved meeting the four crime-solving friends and learning more about how each woman slotted into the puzzle.  Their friendship is a cornerstone of the plot and I loved the change in pace and levity that their meetings brought to an otherwise fast-paced, serious book. 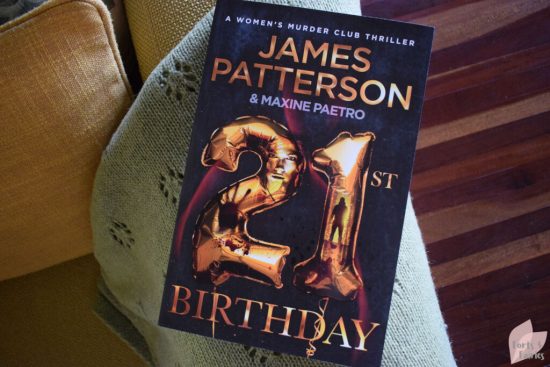 Tara Burke, a young wife and mother, is missing along with her baby girl. Tara’s mother is desperately worried about her daughter and granddaughter, she believes that Lucas, Tara’s husband, has something to do with their disappearance. San Francisco Chronicle reporter Cindy Thomas brings the suspicion to Detective Lindsay Boxer who sets out to track down the missing pair at any cost.

The stakes get higher as the first body washes up on a beach, with the case slowly unraveling into something far bigger than anyone expected. Is there a serial killer on the loose and will Boxer be able to protect the young woman long enough for her to see her twenty first birthday? The city’s chief medical examiner Claire Washburn has her own theories of the Burke case, while Assistant District Attorney Yuki Castellano believes Lucas could well be a domestic offender.

Lucas is adamant he’s innocent, and ultimately puts forward a surprise theory and a new suspect that nobody expected. Who is telling the truth, and will the Women’s Murder Club solve this mystery before it’s too late? You’ll have to read 21st Birthday to find out!

21st Birthday is available for a recommended retail price of R320.