Monster Jam roared into the Moses Mabhida Stadium in Durban last weekend, the show’s first time wowing crowds in South Africa. The big trucks captivated us with tricks and races for a full 90 minutes, and left me hoping they will keep their promise to return next year to our country. The excitement was real as we entered the stadium and saw the field set up with ramps. The show features the best truck line-up ever assembled for an international performance, including Monster Jam World Finals champions Grave Digger and Max D.  The show kicked off with a race event, where two of the eight trucks faced off until the last two standing entered the final. It was here that we got our first taste of just how high the trucks can jump over the ramps and how skilled the drivers are at negotiating tight corners. There was live commentary from the Monster Jam team, who also mingled with the crowd interviewing fans.

Inevitably some trucks didn’t quite land correctly after the jumps and toppled over. But I think my children enjoyed watching the enormous CAT machines pulling them back upright and sometimes towing them off the field just as much as they enjoyed seeing the trucks race! During the show some of the trucks sustained damage to their engines and brakes but engineers got them up and running again. Other times the damage was only cosmetic with pieces of the shell casing coming off as the trucks toppled over. The rain came down during the first half of the show, making for slippery and muddy conditions. This didn’t deter the drivers at all, they simply suggested a doughnut competition and then proceeded to amaze us with how many they could do in one go! There was also a two wheels skills challenge where the drivers had to drive for as long as possible on only two wheels. The drivers incredible skills (and nerves of steel) were again showcased as they manoeuvred their trucks to go on only the front two wheels or back two wheels and then later onto the side two wheels in impressive wheelies. The audience was encouraged to vote online for each driver, awarding points at the end of each round to determine the winner.

The highlight of the night for me was the freestyle competition. It’s here when we saw the trucks jumping high into the air off the ramps and some of them even doing a full 360 degree flip in the air which you have to see to believe it’s possible with these monster trucks. I love that the trucks were each introduced on the big screens before they raced, and that each truck and driver have such different personalities. Because Amy has the Megalodon truck and Ethan has the Monster Mutt Dalmation truck, watching these two race was always fun with each child always rooting for their favourite. 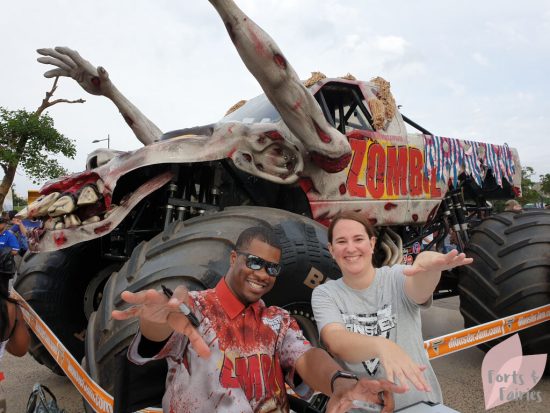 Zombie was my personal favourite. Watching this truck race with the two arms bopping in front of it was always entertaining, not to mention this driver showed off his skills on the night with incredible jumps and braving the 360 degrees flip too. I also loved that he popped his head out of the truck to do the Zombie arms after each race, and I’m not shy to admit I was joining him every time in the crowd! The ‘Who let the dogs out’ song clip played before Monster Mutt Dalmation was a hit, as was the bell tolling before Grave Digger. I loved that two of the trucks were driven by ladies, completely inspirational to the young girls in the crowd.

Many happy memories were made taking pictures with the trucks and drivers at the Pit Party, and my children (aged just 3 and 5) sat captivated for the entire show, loving each jump, marvelling at the CAT’s towing the trucks off the field, and rejoicing when the trucks returned. It was a night they won’t soon forget and I would encourage you if you haven’t yet got your tickets to watch the Cape Town and Johannesburg shows to grab them now. Take your children with, they are guaranteed to have an absolute blast at the biggest show on four wheels! Monster Jam will be at the Cape Town Stadium on 27 April and FNB Stadium in Johannesburg on 4 May. Some tips for Monster Jam from a mom:

The Monster Jam shirts were only available for age 7 plus at the Durban show. Lots of parents bought the flags or the souvenir year books for their children which could be autographed. There were noise cancelling headphones available in two different price brackets at the show. I would highly recommend you take your own or buy these if you are taking children with you as the trucks were very loud. The Pit Party was well worth attending to grab some awesome pictures, see the trucks up close and meet the drivers. If you have Monster Jam toy trucks take them with to be autographed, your children will love meeting the drivers and having a special memento from the day. Did you enjoy Monster Jam? Yes, it was amazing fun. It helped me to learn about trucks and it was nice to watch because there are trucks that go on their two wheels and trucks that drive on the back ramp to flip.

Did you like the Pit Party? Yes, because I can see the real truck under the dog’s hood and what was inside as well as the engine. I also liked taking a picture with Megalodon, and the ladies who drove the Dalmatian truck (Monster Mutt Dalmatian) and the bull truck (El Toro Loco).

What did you like best about Monster Truck? Watching Megalodon doing doughnuts, that was fun.

What was the most fun thing about Monster Jam? Gas Monkey Garage driving and going up the ramp and his roof came off.

Would you like to go to Monster Jam next year? Yes, because the show was really good!

Did you think it was noisy? No, I couldn’t hear the trucks with my headphones on. 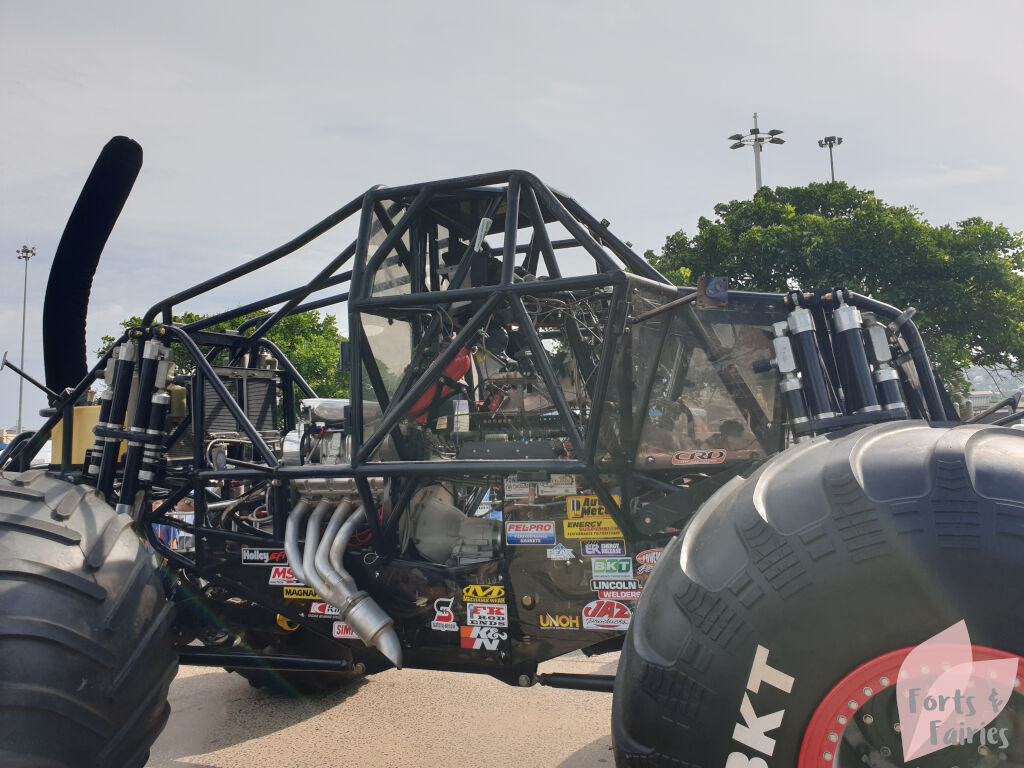 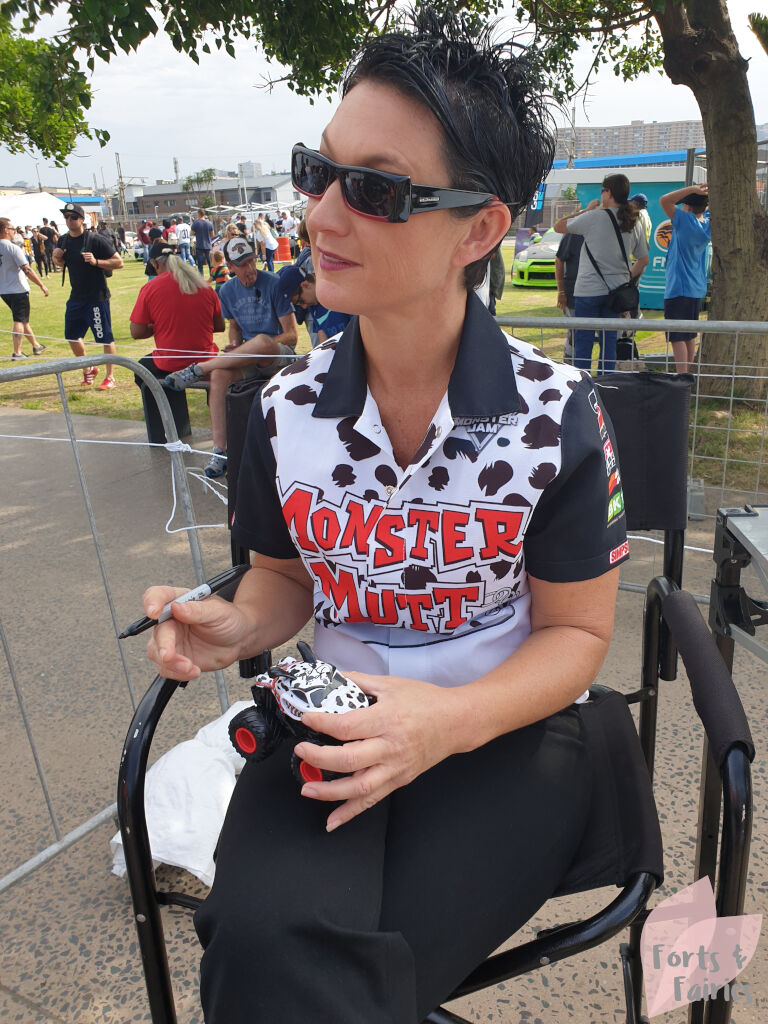 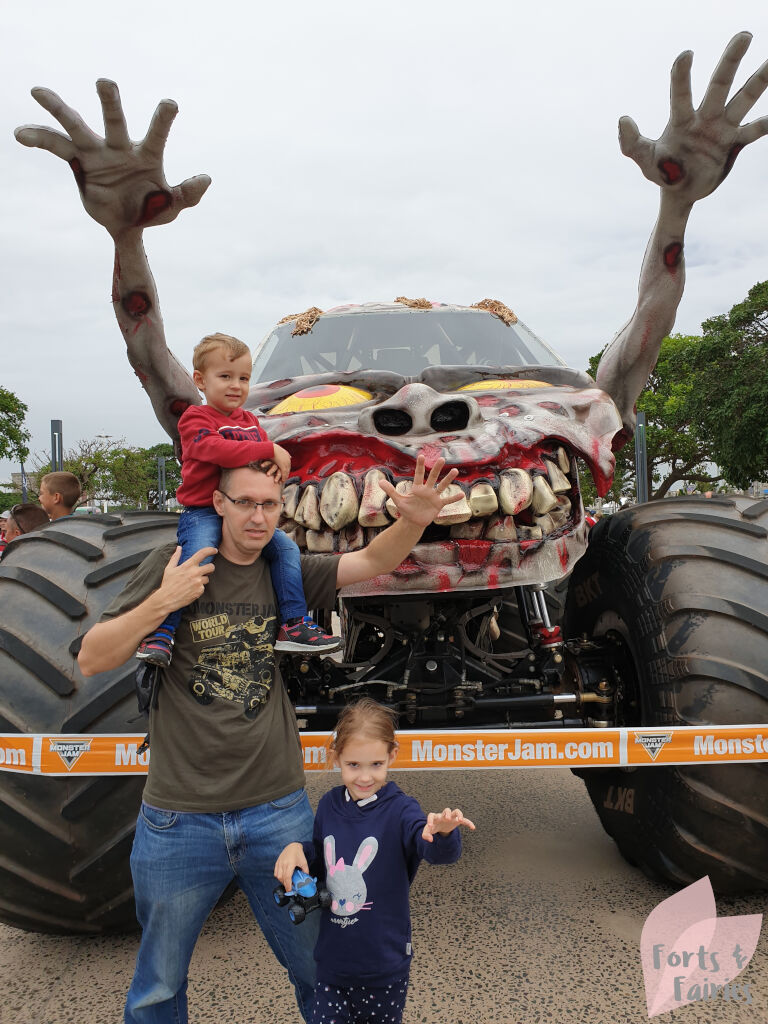 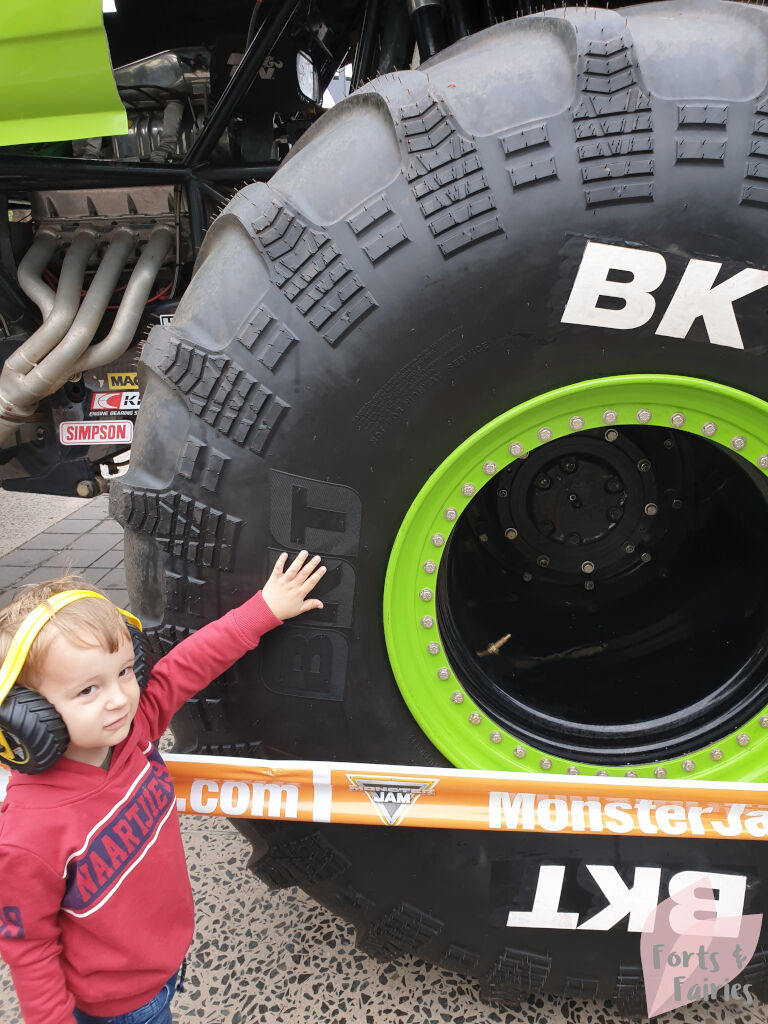 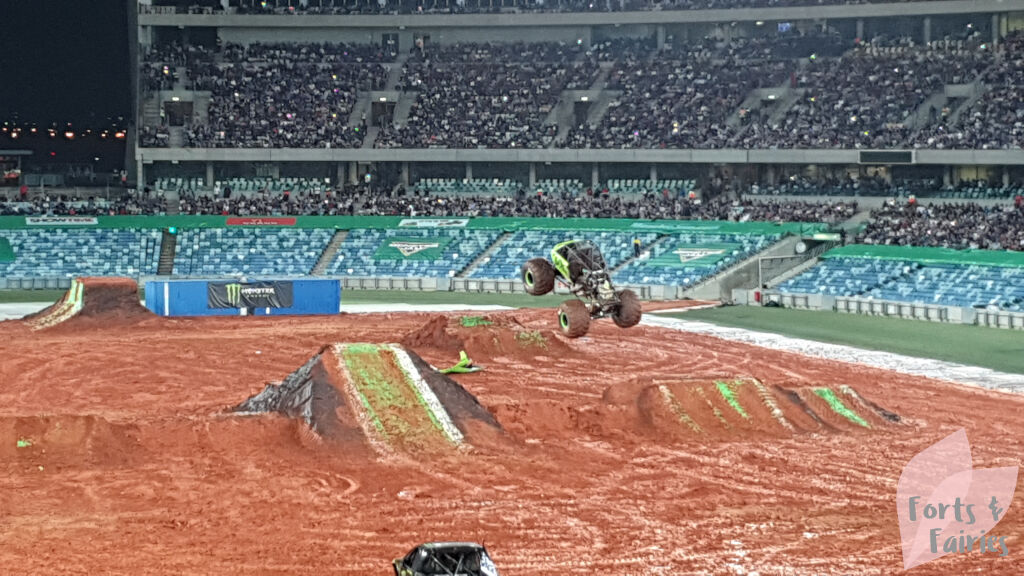 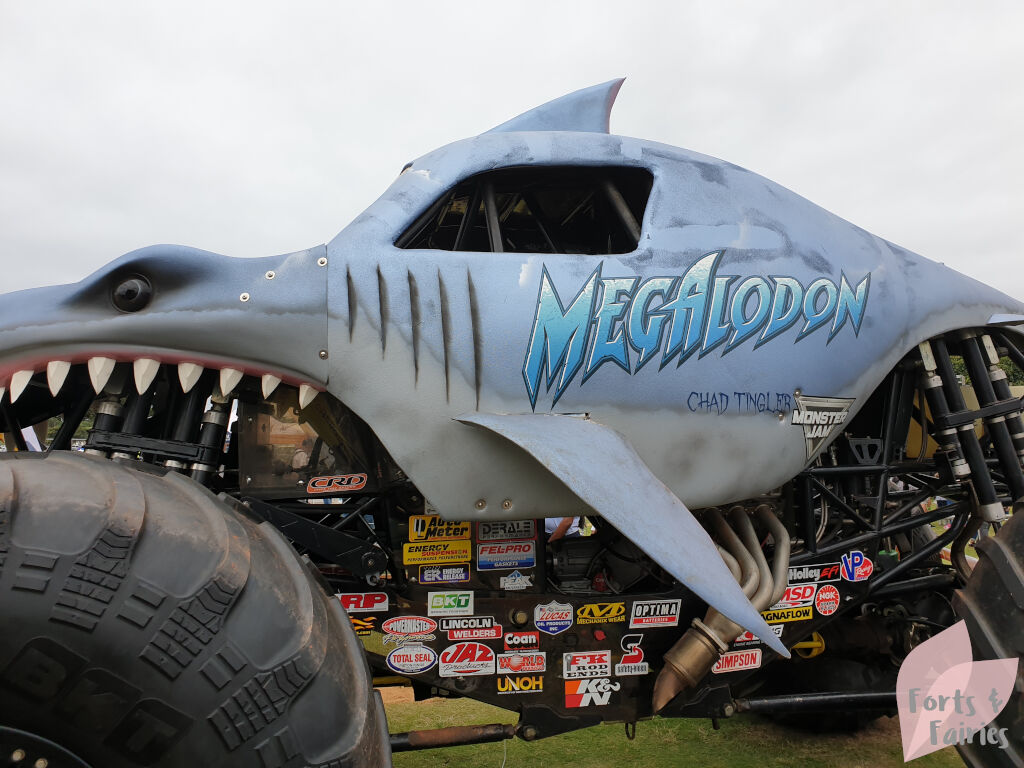 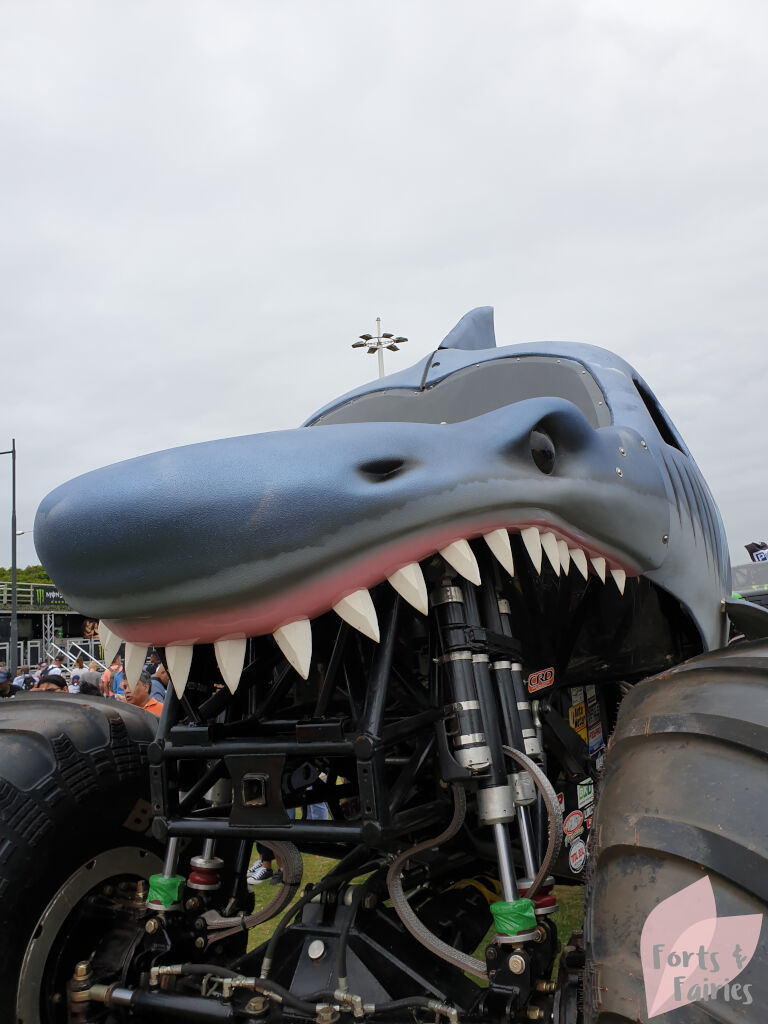 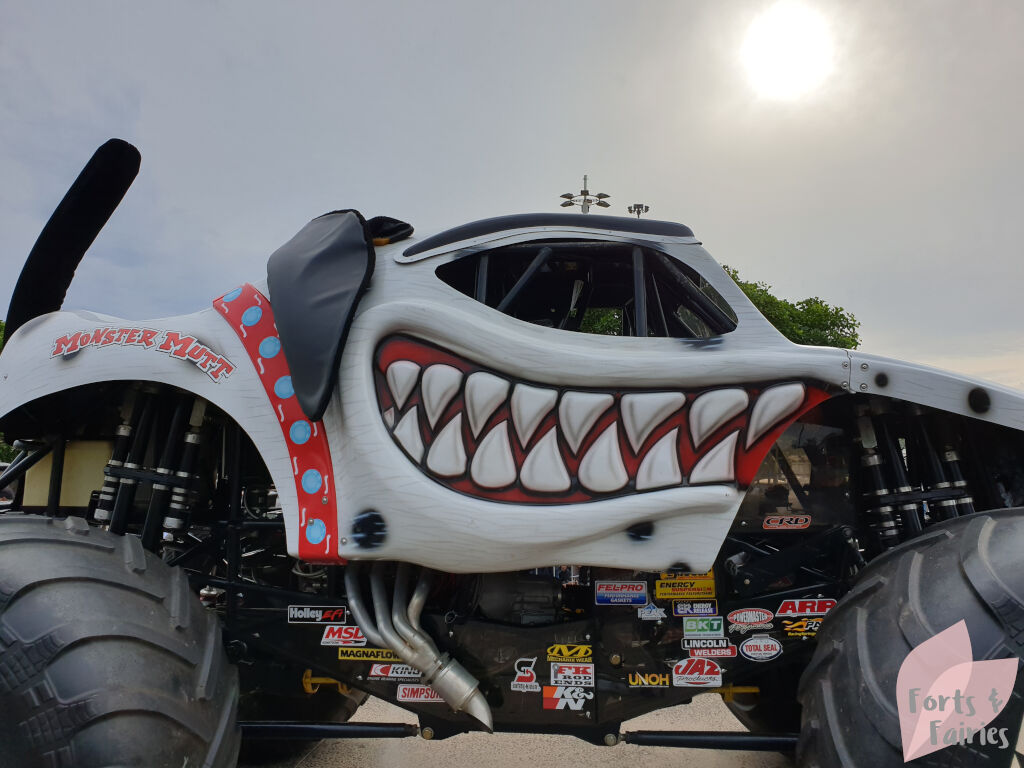 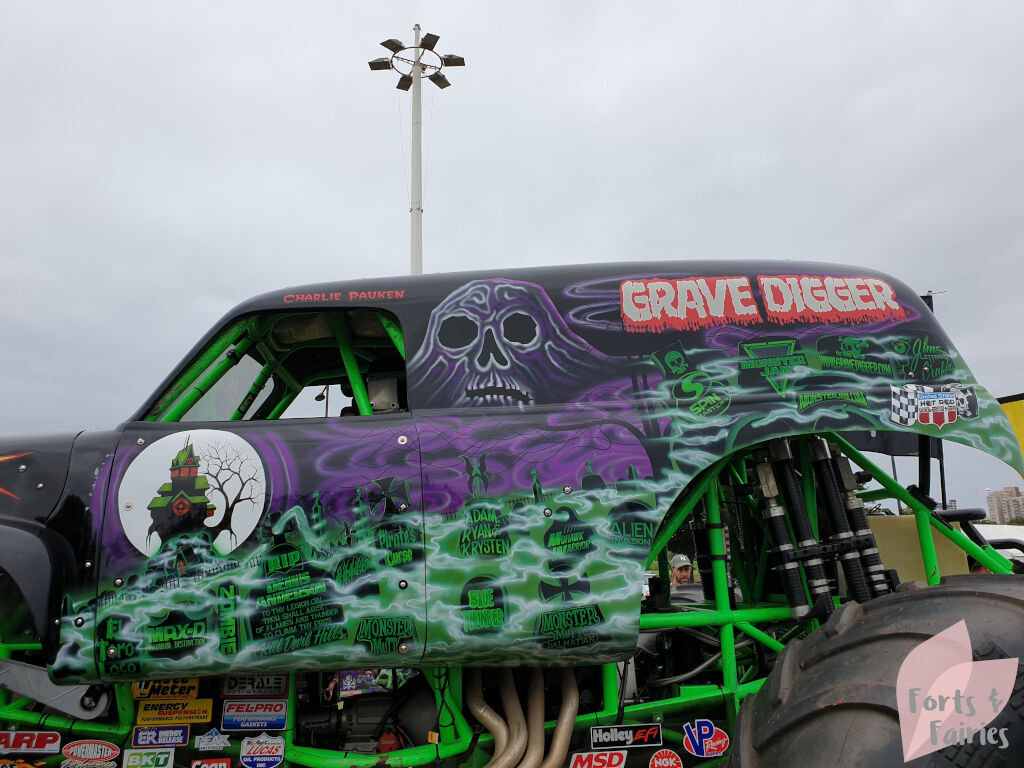 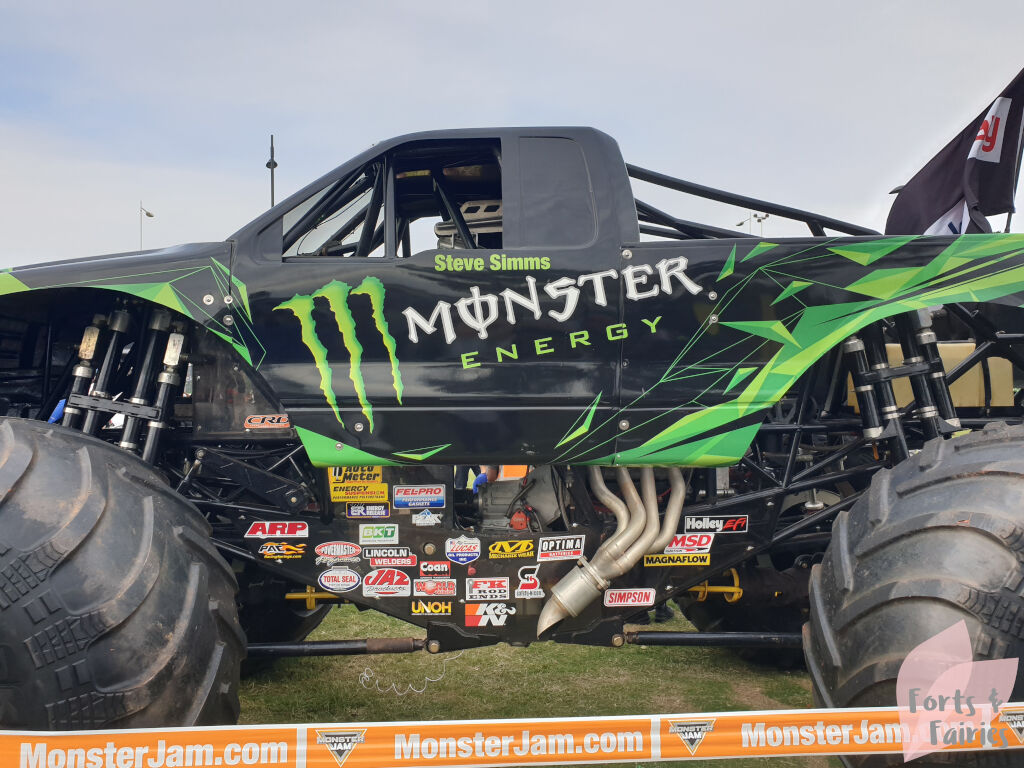 Thanks to Showtime Management for hosting us at Monster Jam!

A Valentine’s Day guide for the whole family!