Project Hail Mary was for me one of the most surprising reads of this year so far, an incredible science-fiction novel that made me remember why I fell in love with this genre all those years ago. Andy Weir has written a story which will captivate you with its imaginative plot, astound you with its descriptive telling, and have you fall in love with the characters who find themselves on a desperate mission to save their world. 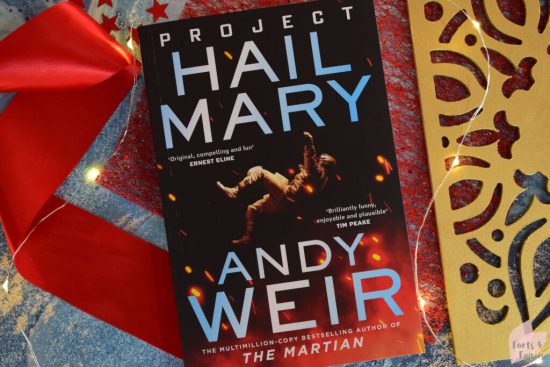 Ryland Grace wakes up, he doesn’t know where he is or even who he is. He’s alone, the other two members of the crew alongside him are dead. He soon realises that he can do scientific reasoning, so he decides that he’s a scientist and from here he also deduces that he’s actually in space. He starts to have flashbacks of memories of the events leading up to the present, and these help him to remember who he is and what he is doing in space.

We’ve probably all been in situations where we’ve needed a Hail Mary before, but nothing quite like the sun losing its warmth which will lead to a disaster on Earth. As the memories start to slowly come back to Dr. Grace we are given a history of the Astrophage, including how it was discovered, what it means and the science behind it. It’s a clever way to let the reader understand what’s happening as you discover it as the same time as the main character.

Grace has been tasked with solving this impossible scientific mystery, the hope of humanity and indeed the future of the planet is in his hands alone. And in order to save the world this lone astronaut must face his fears and overcome the challenges after meeting up with an ally he never imagined. The story is told in a very humourous way, the way in which this unlikely friendship develops as the protagonists work towards a common goal is an absolute delight to witness.

Weir has given us a compelling tale with Project Hail Mary, a story woven together with such originality and wit that makes me believe its destined to become a classic.

Project Hail Mary is available for a recommended retail price of R320.

The One Hundred Years of Lenni and Margot (Book Review)