If you’re a mom you’ve probably heard about the six week mark. It’s a magical milestone that you reach when the baby turns six weeks old, a time when you often feel as if you’re getting into a groove with your new baby and the time when your baby starts to smile. You’ll often read about this six week mark in baby books, and while you’re trying to survive the exhaustion of those early days this idea will be in your head, like a mantra that will help you see the light at the end of the “it’s a new baby shock” tunnel.

Being a second-time mom I didn’t think the six week mark would hold much weight in my life, I’ve done this before right? But after finding out that “it’s a new baby shock” applied to me the second-time around as well, the six week mark began to loom large in my mind. The countdown had begun… 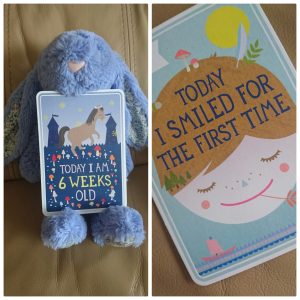 For me I was lucky in that it happened one week early. My little guy started to smile at five weeks, just a little dimple flashed every now and again, a glimmer of a cheeky grin, but it was enough to lift the exhaustion that had clouded my heart and mind. This was why I was doing it, the late nights and early mornings, they were all for that beautiful smile. And beautiful it was, another smile to capture my heart and hold it to ransom for the rest of my life.

We’re just starting out on this journey together my son, but I can’t wait to get to know you and enjoy seeing you smile for the rest of my life.

(My little guy turns 5 months old today, and it’s hard to believe how time has flown since those early days. His smiles continue to capture my heart, except now we have giggles and big hearty guffaws to entertain us too!)

Muddling through the messy toddler years

BYOD: Bring your own dad?

Take my breath away