In IDOL by Louise O’Neill the story centers around Samantha Miller, a woman who becomes an inspiration to young girls on how to be happy and how to live their lives. Her influence is far-reaching too, she has three million followers on social media and her new book is a bestseller. 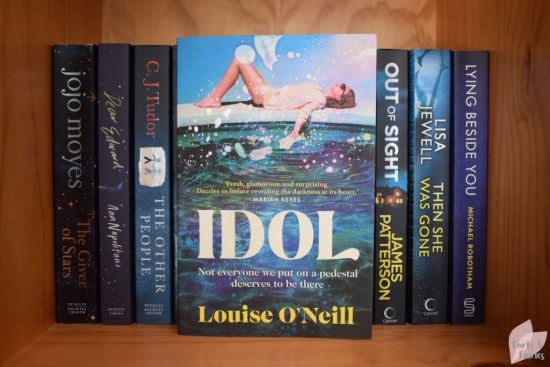 But as she revels in her success it seems that her past is determined to come back to haunt her. After writing an essay about her sexual awakening with a female best friend, that same friend reaches out to challenge her recollection of events that night. It’s been 22 years, we’re left wondering why the friendship fell apart, why the connection was severed all that time ago, and more importantly who is telling the truth.

I didn’t like Samantha’s character from the start, how she had apparently conquered all that had happened to her in her life to become a bestselling author and motivational speaker. Her whole backstory didn’t sit right with me, and her present achievements did nothing to quell that unease towards her either. At least if the character had some sort of redemption in her story I may have felt differently towards her by the end, but she didn’t and I became frustrated with how her selfishness and one-minded refrain of her own achievements caused everyone else around her to spiral into chaos.

Now I do understand that this was basically the plot of the book, but for me I had hoped for more and unfortunately I didn’t find was I was looking for. I haven’t read many books where the lead character was so unlikeable and in fact seems to have been purposefully created to be an anti-heroine, but it didn’t appeal to me. I found myself compelled to read on, hoping that there would be a shift that would redeem her toxicity and destructive behaviour and in fact the entire story for me but that just didn’t happen.

The debate of whose online influence we follow on social media was a pertinent one, and if I took only one thing away from this book it’s that we should be careful who we allow to influence our own lives.