No electricity? No problem!

We live in South Africa, and the reality is that even though we have biltong, braais and blesbok we also have interruptions in our supply of electricity every now and again. Now apparently it’s not loadshedding at the moment, because Eskom isn’t currently doing that right now, but there have been a few technical faults lately leaving us without any lights. As luck would have it it’s happened just before 5 in the evening, resulting in a mad dash to bath the kids before it gets dark and while the water is still warm, and to make alternative plans for supper.

The power goes off, out comes the rechargeable lanterns and candles. This was when I realised the level of excitement in the house was like that of the night before Christmas. For my toddler it was the candles dotted all around and for my husband it was the prospect of takeaway for dinner. As the two of them happily rushed out the house to go pick up our takeaway, I found myself wondering why I just don’t turn off the lights more often! 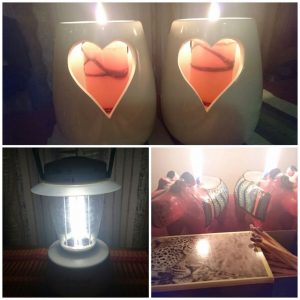 This past weekend we found ourselves in the same boat again, but this time around I quickly fired up the gas braai and cooked some bacon and egg rolls for dinner. Amy was just as excited about the candles, and even more so about the lantern when she bathed, but this time she also got to hold a torch (suppose I have a new item for Santa’s list now too)! Sadly the husband wasn’t as excited when his takeaway plans were foiled.

Artwork is hard work from the heart